RUN away from George Mumford, of Fisher's Island, the 27th Instant, four Men Servants, a white Man and three Negroes, who hath taken a large two-Mast Boat, with a square Stern, and a large white Pine Canoe; the Boat's Timbers are chiefly red Cedar. The white Man named Joseph Heday, says he is a Native of Newark, in the Jerseys; a short well set Fellow, of a rudy Complection; his Cloathing when he went away was a red Whitney Great Coat, red and white flower'd Serge Jacket, a Swan-Skin strip'd ditto, lapell'd, a Pair of Leather Breeches, a Pair of Trowsers, old Shoes, &c. The Negroes are named Fortune, Venture, and Isaac; Fortune is a tall slim comely well spoken Fellow, had on a Kersey Great Coat, three Kersey Jackets, and Breeches of a dark Colour, a new Cloth colour'd Fly-Coat, with a red Lining, a blue Serge Jacket, with red lining, a new pair of Chololate colour'd corded Drugges Breeches, a Pair of blue and white check'd Trowsers, two Pair of Shoes, one of them new, several Pair of Stockings, a Castor and a new Felt Hat. Venture had a Kersey dark colour'd Great Coat, three Kersey Jackets, two Pair of Breeches of the same, a new Cloth colour'd Fly-Coat, with red Shalloon Lining, a green Ratteen Jacket almost new, a crimson birded Stuff ditto, a Pair of large Oznabrigs Trowsers, a new Felt Hat, two pair of Shoes, one Pair new, several Pair of Stockings; he is a very tall Fellow, 6 Feet 2 Inches high, thick square shoulders, large bon'd, mark'd in the Face, or scar'd with a Knife in his own Country. Isaac is a Mustee, a short Fellow, seemingly clumsy and stiff in his Gate, bushy Head of Hair, sower Countenance, had on a Kersey Great Coat, Jacket and Breeches as aforesaid, a new Cloth colour'd Fly-Coat, with Lining, a Pair of Trowsers, of Guinea Cloth, a new Felt Hat, Shoes and Stockings as above. Stole and carried away with them, a Firkin of Butter, weighs about 60 Pound, two Cheeses weighs 64 Pounds, and Bread for the same. Whoever takes up and secures said Run-aways, so that their Master may have them again, shall have TWENTY POUNDS, New-York Currency, Reward and all reasonable Charges paid, or equivalent for either of them; or secure the Boat, that the Owner may have her again, shall be well rewarded, by GEORGE MUMFORD. 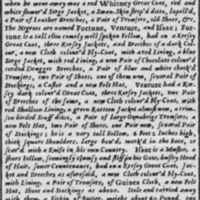